Cyclists from across Africa will join Kenyan riders at the second annual road race in Kiambu County on September 8-9. The event, held at Tatu City, is expected to attract large crowds of spectators as more than 250 cyclists will tackle the 106km course.

The event will take place over two days with family friendly entertainment and refreshments for spectators. On Day 1, the criterium race will be around a traffic free, 4km circuit on Tatu City’s new asphalt surfaced roads. Day 2 will witness the main event – a 106km race running from Tatu City up to Kiganjo, Mundoro, Gatunda and Gitwe. There is also a 60km event for those who find 106km too daunting. A total of KES 400,000 in prize money is up for grabs with equal prize money for the men’s and women’s races

Nick Langford, Kenya Country Head for Rendeavour, owner and developer of Tatu City, predicts that this year’s event would be a big success, attracting not only the cycling elite but amateur enthusiasts of all ages and abilities. “The racing is open for everyone, and for each and everyone the race will provide its own individual challenge. The entire team at Tatu City looks forward to welcoming racers and spectators to a hugely exciting event.”

Teams from all over Kenya, including Safari Simbaz, VeloNos, Kenyan Riders, Nakuru cyclists and Team ARABIKA from Mombasa, have already registered. They will compete against international teams from Uganda, Eritrea and Sierra Leone.

Last year’s event at Tatu City raised the bar for road cycling events in Kenya, and the cycling community is anticipating another demanding and exciting race. The inaugural event held in 2017 saw more than 140 cyclists compete, with Kenyan Riders star Suleiman Kang’ang’I emerging as the overall winner.

The 2018 race will be held in partnership with Hashim “Zuzu” Sharif, a well-known Kenyan cycling enthusiast and organiser of cycling events. Several sponsors including Sossi, Sama Ice, Coca-Cola, Yatta Juice by KWAL, Farmers Choice and Utalii Kwa Baiskeli will be sponsoring this year’s event. 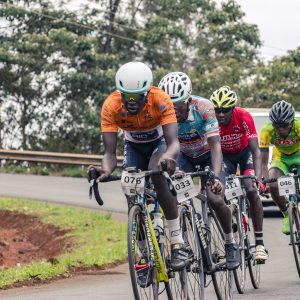